Candidates should go after the criminal vote 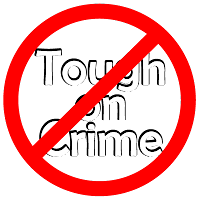 They say that more than 80 percent of the American adult population has committed a serious crime in their life, even though they may not have been caught. So, I was wondering why politicians don't actively go after the criminal vote. With a promise to go easy on crime, you may just get a reasonable percentage of those voters. These clever politicians could instill fear into the masses with speeches about how you may not have been busted yet...but you will be. "And who's gonna be there for you? Certainly not the 'lock em up and throw away the key' candidate."
The debates would be very entertaining. "My opponent is easy on crime." And the response? "Yep." Next question.
They could have a platform which promises to go easy on deadbeat dads...and the moms who kill them.
It is believed that most career criminals do not currently vote at all. This would give them incentive to get out to the polls, thus increasing the number of registered voters. Generally considered a good thing.
And the possibilities for campaign slogans are endless:
"Do the crime, not the time."
"Go on a spree, I'll set you free."
"Smoke a joint. Don't be sent to one."
I think I may be onto something here.
Posted by Gary Thison at 12:50 PM No comments: 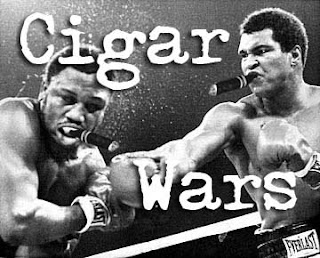 I don't know about you, but if I'm not going to be able to sit and fondle, admire and enjoy a cigar, with a nice glass of scotch and very little risk of anyone interrupting my almost zen-like smoking experience, then I'd rather not smoke a really good cigar. Okay, if I could afford it I'd probably always smoke a more expensive stick, but that ain't the case.

So, last weekend, when I was going to be out working in the yard and cutting the grass, I chose two inexpensive cigars to stick in my mouth and puff away as I tackle my chores. So I'm clear, I didn't stick them both in my mouth at the same time. I smoked one. Then the other. Let's get ready to mumble!

As I often mention, I like a cigar that will take a biting and keep on lighting. But, ideally, with a minute or two break between puffs, a reasonably decent cigar should remain lit and take only a little coaxing to deliver a full smoke-filled kick.

I started my lawn cutting chores last weekend with a La Finca Cazadore (45 ring x 6.5 inches). I recently purchased a bundle of these cigars when I re-posted my review of them. This time, I was rather disappointed in the unravellability (yes, I make up my own words) of the outer wrapper. This was especially true if you didn't smoke the cigar in one session and put it in a cigar-saver to re-light later. They get quite dry and the wrapper becomes brittle and peels off. A real pain and it greatly increases your risk for burning a shirt.

However, when lit and smoked end to end, it held up quite well. Although the ash isn't smooth and pretty, it burned evenly and didn't require any re-lighting. Smooth it ain't. Spicy? A bit. Full bodied. Decent grass cutting smoke.

Upon completing the lawn and the La Finca, I took a short break and started faze two: weed whacking, edging, blowing and smoking a Tambor Dominicano Churchill Maduro (50 ring x 7 inches). These cigars have a nicer visual first impression than the La Fincas, but they're actually a bit less expensive. You can find them for less than 25 bucks for a bundle of 25. Yay! A buck a stick.

But.....they kinda suck. I bought a bundle about six months ago, and only smoke them when all of my other options are gone. I probably hadn't smoked one in the past three or four months, so I'm thinking that the fact that the smoking experience wasn't all that bad this time may be a result of keeping them properly humidified for that period of time.

As I recall, my biggest complaint with these cigars is that they do not burn evenly. And I hate when a cigar burns down the middle, which they do all to often. I'm thinking it's poorly rolled filler with no long leaf running the length of the cigar.

This particular stick started as they always seem to...rough. Once the ash reached about an inch, it was only half an inch on the other side. But, somehow, without coaxing it recovered and burned evenly the rest of the way. Not bad. Good draw. Decent outdoor nose burn. Medium strength. Kinda spicy I think, but I have a real difficult time identifying spicy unless it involves habaneros.

So, which was better? I'd have to give my vote to the La Finca. But, weather permitting, there may be a re-match this weekend.
Posted by Gary Thison at 12:39 PM No comments: