If there's one thing that I think is always a guarantee with any cigar that has the  Rocky Patel name on it is that it is going to provide you with a really nice draw and a great mouthful of smoke. That is surely the case with the Thunder by Nimish (Rocky's cousin I'm told). 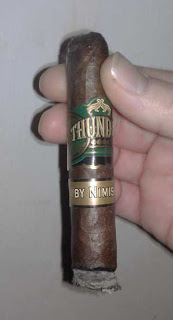 I purchased a Thunder at Churchill's Cigar Bar in West Bloomfield, Michigan, which is a great place to fully enjoy a cigar without the dirty looks from unenlightened, pompous pricks. :) They have an amazing selection of cigars in their walk-in humidor and a full bar for your imbibing pleasure.

But, I digress. After finishing the cigar I was smoking when I arrived (an inexpensive, but very nice Quorum), I proceeded to the humidor and was immediately approached by our waitress. A delightful woman with a Lithuanian accent. Probably because she is from Lithuania. (Man, that college is paying off.) And the most refreshing thing was she seemed quite knowledgeable about cigars and had one going herself in the other room.

Of course, she's trying to push up your tab by getting you interested in cigars you may not have tried, but I told her what I liked and she recommended the Thunder by Nimish. Good call.

I loved it immediately upon lighting it. A very nice draw, lots of smoke, a great spicy kick and it stayed consistent until the end. I chose the Toro (6 x 52) with a Habano wrapper (with a nice smooth feel), Nicaraguan and Honduran binder, with Nicaraguan, Honduran and Costa Rican fillers.

I like the rich smoke and faint underlying sweetness to complement the spicyness. About 6 bucks when purchased in single stick manner or a little over $100 for a box of 20.

All in all, nice going cuz.

Posted by Gary Thison at 7:31 AM No comments:

Hostess and Kodak going bankrupt? How will I take a picture of my Twinkie?

Another two American institutions, Hostess and Kodak, are filing for Chapter 11 bankruptcy protection. Who's fault is it? Yours!

Go ahead, take a look in your cupboard. Any Twinkies? Wonder Bread? Probably not. You're probably ruining America by eating granola bars and whole grain bread.

And who develops your photographs? Oh yeah, NOBODY. And your camera? Probably not made in the USA.

So, is it any wonder that these two former giants may be going down? Not really.

Hostess was already under Chapter 11 a mere three years ago, and currently owes about $50 million...just from last month. Kodak is preparing for Chapter 11 bankruptcy protection, is looking for a billion dollars and the NYSE is threatening to kick them right off the exchange if it can't increase its share price in the next six months. Their stock recently fell 30% to about 44 cents last week.

It looks like my grandfather may have been a wiser man than most thought, when he predicted the demise of both of these companies. Regarding Kodak, he said they would be a "flash in the pan" and that Hostess is like marriage, "you can only enjoy the Twinkie for a while."

Never really knew what the hell Grandpa was talking about.
Posted by Gary Thison at 6:59 AM No comments: