Writing comedy for Herman Cain
I wish I had been a speech writing consultant for Republican presidential candidate Herman Cain at last night's West Coast, Las Vegas Republican Debate. When they asked each of the candidates to briefly explain their differences from President Obama I would have advised him to say, "Frankly, it's black and white. No wait, not exactly..." and then go on with his point.

Coffee dilemmas
I'm working in an office building in downtown Detroit. The coffee is provided by the employer. It's not great coffee. It's brewed in one of those giant, three-burner, industrial Bunsen-like coffee machines. The machine has been there (without any internal cleaning that I know of) for at least five years. This makes it hard to determine whether the coffee tastes like it does because of the ground coffee or the maker. I think both.

Then to make matters worse, the plastic/aluminim, welded-shut, single-pot envelope which contains the coffee is supposed to have a little slit on the side for easy tearing and dumping into the filter basket. About 80% of the little envelopes have no little slit, forcing you to pursue alternative methods of openage. The simplest and most obvious would be to walk back to my desk, get a pair of scissors and return to cut the bag. Or better yet, just bring the bag with me to my desk (it's not that heavy), cut it and return to the coffee making area. But that would be wasting 70 steps that I can use later to move toward a location I'd rather be heading toward.

The only other option is to attempt to pull each side open, separating the sides which have been very carefully crazy-glued together so that when you do finally get them to snap apart the coffee grounds go flying everywhere.

This is a lot of work for a bad cup of coffee.

Of course, I'm pretty spoiled because at home I use the Keurig B60 Special Edition Gourmet Single-Cup Home-Brewing System

Looking for stupid fun?
Of course you are. Take a look at this clever, funny lunatic who created an interactive, online fortune telling video.

Peace on you all.
Posted by Gary Thison at 5:20 AM No comments:

Not much need be said about these two great photos. If you really want one of the Exit Before Tweeting signs you can order from Shark Robot. 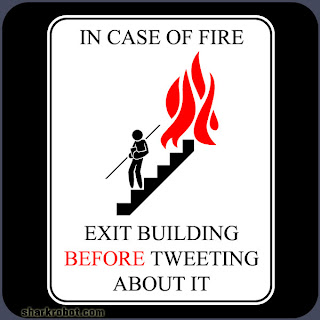 Hey look! Only 80 calories! But check out the Serving Size. 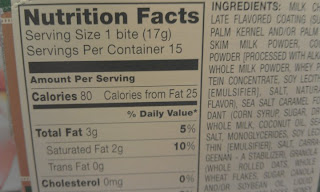